1.2.1 The truth about "biodegradable" diapers

1.4 Well-being for you and your baby

2. Getting to know cloth diapers

4. Options to wash the diapers

5. Cloth diaper service - What is it?

Whether it’s for environmental reasons, for convenience or simply because it was a gift you were given, using cloth diapers is, nowadays, a revolutionary act for you and your baby.

Cloth is the best for your baby

You might have heard how difficult using cloth diapers was for other generations. Our grandmothers tell us that diaper materials were low quality; rubber pants were made of a non-porous plastic that kept in heat and liquids and, if not cleaned promptly, they immediately irritated the baby's skin. Moreover, it was complicated fastening the safety pins that held the diaper and they poked both the baby and the parent doing the diaper change.

Those difficulties helped disposable diapers come into the market which, since the 1960's, have been advertised as a clean and easy-to-use product. Today in the face of such great environmental challenges, we need to reevaluate what we want for our babies and the environment. That is to say: we are in the 21st century and the experience of using cloth diapers is nothing like what our grandmothers went through. Even though it may seem similar, it's not. Today's diapers are an environmentally friendlier option, comfortable for babies, and practical for parents.

The first thing you need to know is that your baby will use, from their birth to around 3 years of age, over eight thousand diapers. Therefore, using disposable diapers will result in approximately one ton of waste, which means a great amount of non-recyclable trash that will end up in mountains of trash, creating a huge environmental impact in just a few years.

Disposable diapers are made of plastic and oil by-products, as well as, sodium polyacrylate, gels, and other chemicals which make their decomposition almost impossible in the landfill. It is estimated that they take up to 500 years to decompose. The chemicals used to manufacture disposable diapers can also affect your baby; it has been shown to contribute to skin irritation and allergies in babies.

1.2.1 The truth about "biodegradable" or “compostable” diapers

Biodegradable diapers are a relatively new option found in the market and advertised as an environmentally friendly option due to the fact that they are compostable and comfortable for your baby.

Big conventional disposable diaper manufacturing companies have focused on offering green alternatives and selling us not only the product, but the false idea that they contribute a positive impact for the environment.
This kind of diaper manufacturing is completely industrial, which already casts serious doubts about the environmental advantage advertised about the product.

They are not 100% compostable. You should know that before throwing them away into the organic trash you need to remove the solid waste from the diaper like conventional single-use diapers. (And honestly, who does that?) Also, composting has to be done in an industrial composting facility, otherwise the diaper will not fully decompose.  Very few cities in the US have composting facilities for "biodegradable" diapers, which definitely doesn't guarantee the diaper is going to be disposed of properly.

In summary, the mere fact that the diaper is disposable, biodegradable or not, makes it trash once it's been used. And if that trash can only be composted industrially and there are very few facilities that can take care of the composting of that "biodegradable" trash, then, there is no guarantee of decomposition without environmental harm. That trash will remain as it is for 500 years or more just like any other disposable diaper.

Cloth diapers are a sustainable and healthy option for you and your baby. Especially diapers made of cotton and natural fibers that allow greater comfort for babies and no non-recyclable waste generation.

We need to keep in mind that reusing materials is a trend that mitigates impact on the environment and is increasingly necessary in the era of climate change. We know a cloth diaper can last for years; they can even be kept and used for following generations if washed and cared for properly. That way, the "diaper" topic won't be a burdensome expense, but a family investment that also helps the environment. 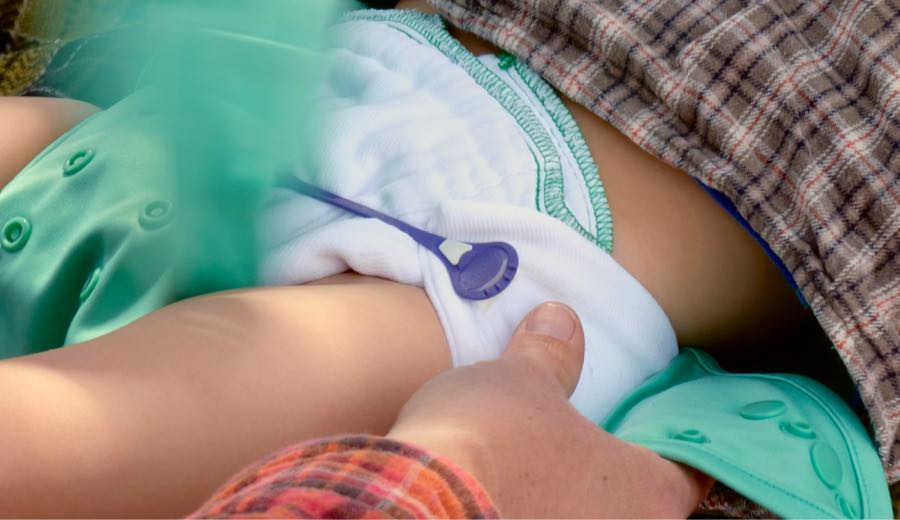 1.4 Wellbeing for you and your baby

We believe the most important thing to know is that using cloth diapers is the best for your baby. On one hand, skin irritation in babies won't be a constant problem anymore unlike using disposable diapers, since cloth diapers cause fewer diaper rashes and don't contain chemicals.  On the other hand, there is an important relationship between children and the awareness of their waste. It has been proven that children will let their caretaker know that they are wet, and that helps them get out of their dirty diapers sooner, which means using cloth diapers is cheaper in the long run because they’ll potty train much sooner than if they were using disposable diapers. Confirm you're not a Robot and you are a Lovely Parent!